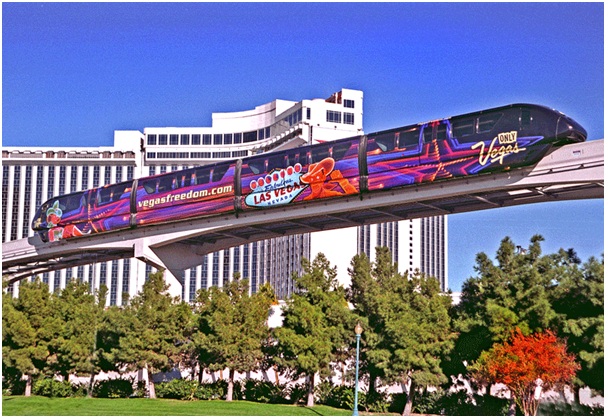 If you are planning to go to Las Vegas and thinking of conveyance then there is excellent tram service available.  There are three free monorails owned and operated by casinos on the west side of the Las Vegas Strip. These three non-related systems offer a patchwork of convenience for walking-weary tourists which can save a lot of time. Also they are different than the longer, official Las Vegas Monorail system on the other side of Las Vegas Boulevard, which you have to pay to ride.

1. The Mandalay Bay to Luxor to Excalibur 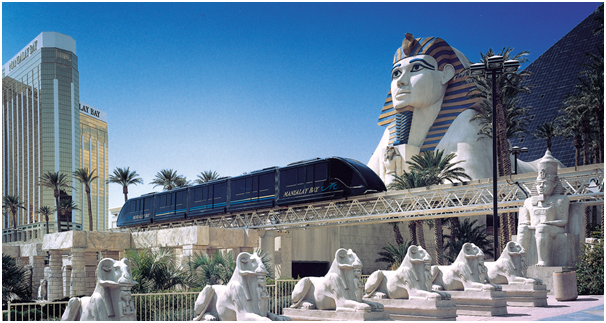 This monorail or tram shuttles from Mandalay Bay to Luxor and to Excaliber because all the three of these casinos are owned by MGM resorts so you can play pokies or casino games by stopping at any of these casinos. Starting at Mandalay Bay, this tram goes north, stopping at the Luxor before ending at the Excalibur Hotel and Casino. All three stops have great signage to help you get around and figure out where you’re going.

The train cars themselves are clean and air-conditioned, but can get pretty crowded sometimes – especially on busy Las Vegas holiday weekends. The trip takes about anywhere from 7 to 8 minutes to the maximum time of commute.

Note that this is not a 24 hours of operation. This tram hours of operation is from Sunday – Wednesday from 9 AM to 12:30 PM and on Thursdays to Saturdays from 9 AM until 2:30 PM. During operating hours, trains run every five minutes or so, so you won’t ever be waiting long. From the Excalibur Tram station, it’s just a quick walk over the pedestrian bridge to get to either the Tropicana on the east, or the New York New York to the north.

2. Monte Carlo to Aria to the Bellagio 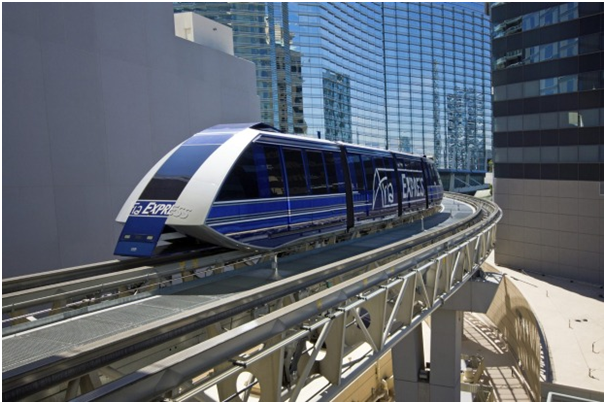 Starting at the south, the monorail, called the Aria Express, begins outside, near what used to be called the “Street of Dreams” shopping mall at the Monte Carlo Hotel and Casino. The Monte Carlo is or soon to ve the Park MGM Hotel & Casino, with a boutique hotel called the NoMad Hotel located within the property as well. This Monte Carlo/Park MGM stop also leads you close to one of the entrances to the Aria. From the Monte Carlo stop, the tram heads north, stopping at the Crystals shopping mall, which is the dropping off point for those of you heading to the Cosmopolitan. There’s also access to the Aria from this stop too.

From the Crystals/Aria stop, the tram continues north to the south tower (Spa Tower) of the Bellagio. From here, you can go down some escalators, walk past the convention hall, and you’re in the Bellagio. This stop also provides access to the Vdara Hotel. Of course, you can go back the same way. The trip takes between 5 to 8 minutes, and trams run every seven to ten, seven days a week, from 8 AM to 4 AM. 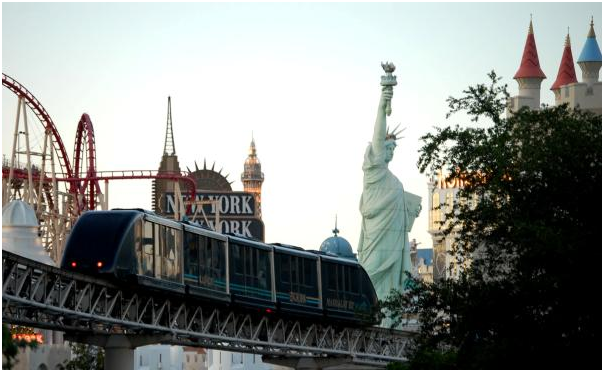 There’s not much else to say about this quick tram trip as it takes less than five minutes, other than it’s the monorail system in Las Vegas that requires the least amount of walking to get into the heart of the casino. Both stops are relatively close to their respective casino entrances.

Unlike the other two free monorails, which just shuttle customers back and forth between casinos that are in the family, the Mirage to Treasury Island tram takes players and drops them off at a competitor’s casino. The Mirage is now owned by MGM Resorts, whereas the Treasure Island is owned by the man who used to own the old Frontier Hotel and Casino, Phil Ruffin. MGM Resorts used to own Treasure Island, but they reportedly had to sell it for a relatively cheap $775 million, to help pay for the costs associated with the City Center project.

Although the tram has shut down on occasions for maintenance and repairs it still runs on its usual operating hours from Monday – Thursday: 9 AM to 1 AM and Friday – Saturday: 9 AM to 2 AM

So to sum up take advantage of these free monorails at the Monte Carlo, take that free tram all the way to the Bellagio, where you’ll get out and walk through the Bellagio – crossing over the pedestrian bridge over Flamingo Boulevard towards Caesars Palace. From there, you could either walk towards the Mirage on the strip sidewalk, or take a cooler stroll through Caesars Palace and the Forum Shops.

From the Mirage, take the tram to the Treasure Island, where you’ll exit and take the pedestrian bridge across to the Venetian, where it’s just another fairly short pedestrian bridge walk to the Wynn  which is not really the northernmost part of the Las Vegas strip, but close enough. Note that like the other trams and monorails on the Las Vegas strip, the passenger cars are comfortable, and always seem to be clean. Be sure to hold on to something around you, as they can accelerate and stop deceivingly fast.

Also there are other paid or point based shuttles that you can take like the Sam’s Town Shuttle or the Rio Vegas Shuttle. Find here the train hours and buy your tickets here. 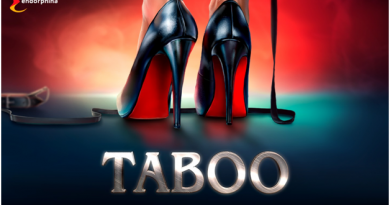 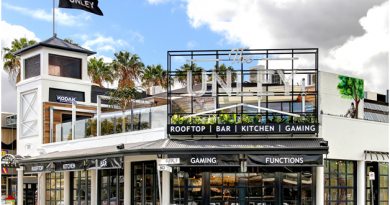 Pokies at Unley to Play and Win

The Great 5 New Pokies Machines You Will Love To Admire